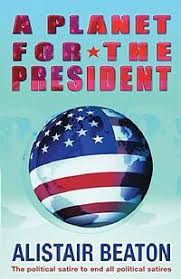 A Planet for the President, by Alistair Beaton, showed up in the remainder bin at BookPeople in Austin, and thus, inevitably, followed me home.

It’s a dark comedy by a British writer about a US President of the conservative stripe (the name of his party is never mentioned but is obvious) and his cabinet finally coming to terms with the unsustainability of the American lifestyle on a crowded world. This group decides that rather than dealing with the sustainability aspect, they might just want to consider the crowding aspect…

Many hilarious incidents ensue, the situation becoming ever bleaker. For instance, the plot is almost leaked on account of a fastidious general ordering an enormous supply of deodorant, in the hopes of keeping the fumes from enormous numbers of dead Mexicans and Canadians from wafting across the border.

Perhaps the most striking aspect of the book, and hard luck for its author I imagine, was the scene wherein New Orleans was devastated by a hurricane and ensuing floods, creating thousands of casualties. The book was published only a few months before Katrina hit. In the storyline, the President is distracted from the disaster by his son’s publicly coming out as gay.

(In this regard, the fictitious president is actually slightly less horrifying than Bush was in the event, as Bush had no real distraction but paid no attention anyway. Sometimes truth is very strange.)

I think it may be time to take yet another president’s suggestion. Bill Clinton recently said:

“If you’re an American,” Clinton said, “the best thing you can do is make it unacceptable” to be a climate change denier. “We look like a joke, right? You can’t win the nomination of one of our major parties if you admit that the scientists are right.”

Well, unfortunately we’ve been looking like a joke for a while. And while it’s a gloomy sort of a joke, sometimes it pays to laugh.

This book is out of print, but Amazon has a dozen or so copies at cheap prices. I won’t tell you how it ends. I will tell you I enjoyed it.