Continuing the discussion from

The Leisure Crisis, Feminism, and Overwork

and herein lies the issue that has many people worked up. Apparently I have inadvertently taken the wrong side of it in some way. I am not sure what correctness I have transgressed, but I feel like I should plunge ahead.

This graph shows profits have recovered to pre-recession levels, but “labor” (really, payroll) income has drastically lowered. Given what is currently happening to Wisconsin, and what is currently happening to climate conversation, and the general lack of honesty I have seen from certain quarters about who should take the blame for the debacle, I cannot easily dismiss a conspiracy to extract wealth from the workers into the hands of the oligarchy, as I ordinarily would have done. If a man as reasonable and as involved as Russ Feingold can say

It’s divide and conquer by the big money interests in this country, that’s always been their strategy. Frankly, I don’t think all of us saw it coming. I certainly didn’t see the ruthlessness and how far they would go with this.

it isn’t possible anymore to shrug off the idea that the problems we are seeing amount to a sophisticated form of looting, of reverse Robin Hood, of exploitation of the middle class by the wealthy. Still, it may be worthwhile to step back and take a longer view.

which seems consistent with this image from the Fed:

and in that source we can identify that what is being plotted is salaries as a fraction of net income plus salaries; i.e., the proportion of the captured value in a business that labor keeps. Even before the astonishing recent drop, things were flat for half a century, and have been trending mostly downward since the start of the Clinton administration.

Now, rather than looking at the odd “unemployment” number which seems somewhat ill-defined, we can look at the percentage of the population employed: 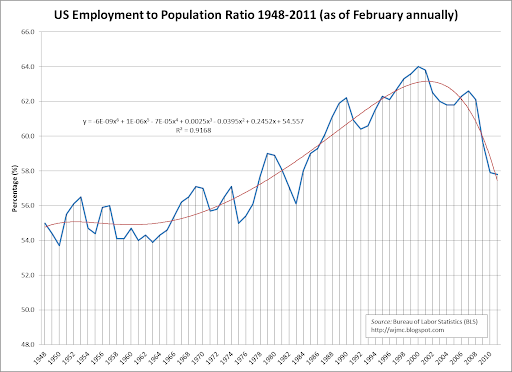 The fraction of the total retained by salaried work has stayed steady and lately retreated. But the number of people working as a fraction of the population has (until recent events) steadily increased, and there is plenty of evidence (See Juliet Schorr’s book The Overworked American) that de facto hours worked or spent in support of work per job has gone up.

During the feminist breakthrough period 1970 – 1990, we see an increase in likelihood that an adult is employed by about a fifth. Because of the frictions in a household where two adults work, and because of other pressures, hours also arguably increased.

When we look at household income, we do see a barely comparable increase:

but it hardly compensates for the lost intangible benefits of a stay-at-home adult, contributing to raising the family and building the community.

Now consider that US GDP more than doubled during that same period.

Clearly this doubling is not showing up in median household income. It must have fone to the rich, as other metrics confirm.

For families with two modest incomes, that means a constant time scramble. For those with only one income, it means poverty.

(In any case it leaves nobody in the middle class with any time or energy to participate in democracy. Television substitutes for conversation. And this ties in at the end when we try to decide what we can do about the present mess.)

So in fact, what Weiner and Reuther feared in some sense came to pass. People did start competing with slave-machines. Also, of course, with near-slave-workers overseas. And finally, with more of each other as women entered the workforce, providing a gift not, as they intended, to their families or themselves, but primarily to corporate interests.

For the most part, this did not occur in other advanced countries. It’s interesting to speculate why. I think it’s because America has been in a phase of professionalized politics for a long time. The professional politicians didn’t understand the scale of the changes, and the general public didn’t understand the need for legislation to protect it. Americans are peculiarly disengaged from politics.

But the point is that labor lost its bargaining power during arguably the greatest period of growth in any nation ever in history. That seems simple enough.

But things remain baffling. After fifty years of compounded robust growth from a rather wealthy start, the country is suddenly pleading poverty, defunding its grade schools and libraries and parks. How is such an absurdity taking place?

Hint: The Red Queen has the answer.