I heard of someone not getting a writing job because they were unable to adequately define “irony”. I hope it isn’t true. That’s a difficult challenge. Someone quick on their feet might say “That’s a hard one but it sure would be ironic not to get the job because I couldn’t define one of my favorite words.”

I don’t know if weather can be ironic. But if it can, it’s ironic that the great Texas drought of ’11 has spread into the bayou country, which is about to get a special delivery of pretty much every drop of water missing from Texas.

We finally got a decent rain this week, in fact exceeding the daily local record in Austin (ho hum, right?). In fact, the majority of our rain for the year to date fell on Thursday. Much of Texas got this bit of relief. And though it’s perhaps silly for the governor to issue a solemn proclamation to that effect, this plea for prayer seems poignant to me.

May 12 (Southwest Farm Press) – The Texas Farm Bureau board of directors, meeting in its regular quarterly session at its headquarters in Waco, Texas, issued the following statement of urgency:

As wildfires in Texas continue a rampage across more than two million acres, another major disaster is gripping the Lone Star State. Dry weather has a stranglehold on all but a small portion of Texas.

Almost the entire state is officially classified in drought—much of it as extreme or exceptional. The seven-month period from October of 2010 to April of this year is officially the driest on record. May is usually our wettest month. Except for a few isolated areas, rain has refused to fall.

Texas farmers and ranchers are in an extremely critical situation as we prepare for June and the hot summer months. Crops are shriveling in the field. Pastures are burning. Many farmers likely will have little or nothing to harvest. Some ranchers already are selling their herds.

The irony is that Texas farmers and ranchers entered 2011 with great hope. Crop and livestock prices were high. Texas agriculture was looking forward to a great year. Instead, we’re facing a situation that could be more devastating than the drought of 2009, when farmers and ranchers suffered direct losses of $4 billion. …

What will help most is steady, abundant moisture. Farmers and ranchers ask all Texans to join us as we pray for rain.

The above quote is from Desdemona Despair, who also provides the following particularly alarming official drought map. 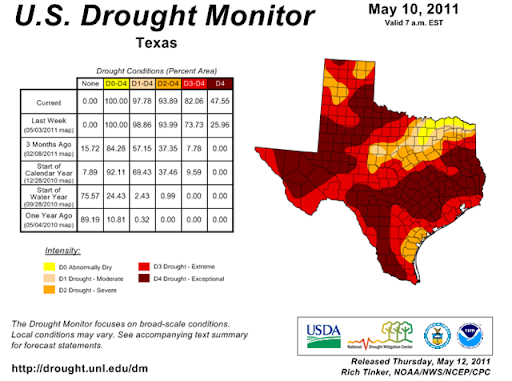