It’s been an eventful week for the hockeystickerati in America. Texas’ own Ralph Hall, representing the ever-watchful citizens of Sulphur Springs, Texarkana, and Paris, Texas itself, has been elevated to the chairmanship of the House Committee on Science, Space and Technology. And he is determined to the bottom of whatever it was in them East Angeles emails and so on. So he called him a tea party of his very own.

The opposition insisted on getting an invitation for Kerry Emanuel, a fellow best remembered for his public spat with his old buddy, contrarian superstar Dick Lindzen. Memo: until Kerry and Dick patch it up, don’t invite Kerry to your parties.

mopey Kerry Emanuel almost spoils the fun
He’s quite the wet blanket, not getting into the spirit of the thing, mumbling depressing stuff like

In soliciting advice, we should be highly skeptical of any expert who claims to be certain of the outcome. I include especially those scientists who express great confidence that the outcome will be benign; the evidence before us simply does not warrant such confidence. Likewise, beware those who deride predictive science in its entirety, for they are also making a prediction: that we have nothing to worry about.

Give it a rest, Kerry. We didn’t elect the Tea Party because we wanted this kind of gloomy gus talk.

Fortunately, the real party hounds of the Tea Party controlled most of the invites, and the rest of the event was much livelier.

The party was much livened, for instance, by the testimony of marketing expert J Scott Armstrong, who with the assistance of the much-esteemed Willie Soon, examined the extent to which some ninety economic forecasting principles that he made up were applied to the conclusions of the IPCC. They found that almost all of the post-hoc made up principles had been ignored, which was contrary to the scientific method! The punch line? “Based on our analyses, we concluded that the global warming alarm is an anti-scientific political movement.”

They were rolling on the floor in the aisles with that one, ladies and gents.

John Christy repeated his complicated schtick from a couple of weeks ago, but the jokes continued to sail over the congressmen’s heads. I guess they will be inviting him a few times more.

Clearly, though, the life of the party was debutante Rich Muller, recently arrived from the shores of another discipline, Planet 3.0 denizen Robert Rohde (of the erstwhile globalwarmingart site) in tow. He had gotten a huge build-up from Tony Watts and Willis Eschenbach, who expected that that Muller’s physicist whuffie combined with some sneering about station placement would put an end to all this gloom talk once and for all, and we could get back to the more entertaining business of gutting government programs for orphans and war widows and sending the money to contractors who know how to treat their friends. And Joe Romm and his crowd were geared up for another big fight. 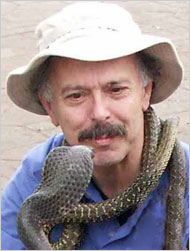 Snake charmer Richard Muller
But Muller surprised everybody by saying, “welp, be darned if it don’t look kinda like a hockey stick”.

Well! I’ll tell you that took the wind out of everybody’s sails.

He tried to ease the pain with some friendly closing words:

Without the efforts of Anthony Watts and his team, we would have only a series of
anecdotal images of poor temperature stations, and we would not be able to evaluate the integrity of the data.

This is a case in which scientists receiving no government funding did work crucial to
understanding climate change. Similarly for the work done by Steve McIntyre. Their “amateur” science is not amateur in quality; it is true science, conducted with integrity and high standards.

But that sugarcoating fell on deaf ears. Willis Eschenbach’s struggled to keep his famous temper in check.

With his testimony, Dr. Muller has totally destroyed any credibility he might have had with me. He might be able to rebuild it by explaining his strange numbers. But to give that kind of erroneous testimony, not in a random paper he might written quickly, but to Congress itself, marks him to me as a man driven by a very serious agenda, a man who doesn’t check his work and who pays insufficient attention to facts in testimony. I had hoped we wouldn’t have another temperature record hag-ridden by people with an axe to grind … foolish me.

Is Muller a turncoat? Or is Eschenbach? Weighing in to settle the issue once and for all was no less than Lord Voldemort himself, issuing in his obscure but powerful Voldemorty way some proclamations of eternal enmity for those who examine the hockey stick and find its powers intact. Rage from the Most Evil One ensued in no time at all.

Voldemort, receiving a testimonial for his accuracy

Lord Voldemort’s pronouncements, as usual cryptic and polychromatic but infallible:

Muller is ‘a man driven by a very serious agenda, a man who doesn’t check his work and who pays insufficient attention to facts in testimony’