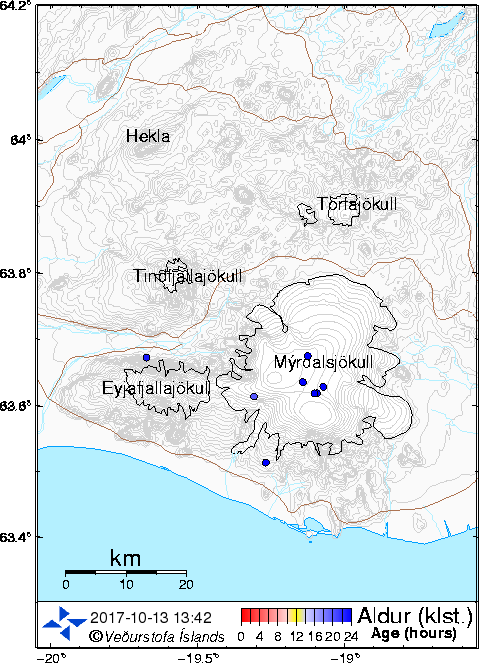 This (updating) image, from the Department of Geophysics of the Icelandic Meteorlogical Service, shows locations of earthquakes in Mýrdalsjökull and Eyjafjallajökull for the last 48 hour period.

Hat tip to Mark Liberman of Language Log of all people. Mýrdalsjökull (the “mire valley glacier”) covers the volcano Katla. According to the Wikipedia article,

In the past 1,000 years, all three known eruptions of Eyjafjallajökull have triggered subsequent Katla eruptions. Following the 2010 Eyjafjallajökull eruptions, on 20 April 2010 Icelandic President Ólafur Grímsson said “the time for Katla to erupt is coming close … we [Iceland] have prepared … it is high time for European governments and airline authorities all over Europe and the world to start planning for the eventual Katla eruption”.

It is thought that Katla is the source of the Vedde Ash (more than 6 to 7 cubic kilometers (1.4 to 1.7 cu mi) of tephra dated to 10,600 years BP) found at a number of sites including Norway, Scotland and North Atlantic cores. Sixteen eruptions have been documented since 930. The last major eruption occurred in 1918, although there may have been small eruptions that did not break the ice cover in 1955[1] and 1999.The 1918 eruption resulted in extending the southern coast by 5 km due to laharic flood deposits. The present volcanic repose since 1918 is among the longest known in historic times.

The spectacular (public domain) photo of the 1918 eruption is also via Wikipedia.