Lucia Liljegren gets to be my next “gate”.

She’s been missing my point about the two devils, summarizes my position as “The Other Side is THE DEVIL!” and has come up with the following clever bit of repartee.

Why is the other side of the debates I’m on always so hypocritical? They always jump on what my side says, and yet they willfully ignore all the faults on their own side. Let’s be honest about the double standard: The other side gets away with stuff that my side would never get away with. It’s just like the other side to be so deceitful: They’re always looking to score any advantage they can. People like that drive me crazy, and it seems like most of the people on the other side are just like that.

Get it? This side? That side? It applies to all sides!

Well, if you follow the link you see the serious answer to this snark, which is “it depends”

I’m going to defy Internet convention and respond to this in complete seriousness.

Remember back in the Cold War era, when the left liked to use moral equivalence between the US and the Soviets? For that matter, there are certain areas of politics now where they still do the same thing. And there are right-wing groups that do it too.

Sometimes both sides say the other side is acting unfairly, and one of them is right and the other isn’t. The solution is not some sort of moral equivalence which says “well, both sides rag on the other. I bet they’re both just biased.” The solution is to figure out which one. It may be hard, but nobody ever said politics is easy.

Creationists say scientists are lying or deluded. Scientists say the same about creationists. But the truth isn’t symmetrical–both sides say similar-sounding things about the other side, but they’re not equally right. The creationists, and only the creationists, are being deceitful and spouting nonsense–and you’d do scientists a great disservice by saying “oh, it’s just both sides using the same rhetoric about each other” when similar words don’t imply similar levels of truth.

And of course creation is just a particularly obvious example. It happens plenty of times in politics. It may be harder to tell which side is right than it is with the creationists, but that doesn’t mean that there can’t be a right side and a wrong side, no matter how similar the two sides seem to sound.

Indeed, the non-sensible side usually makes some effort at sounding sensible (though apparently in the Palin era this is less necessary), precisely to make the choice more difficult.

Let me say again, I think the number of ill-intentioned people among the opposition is probably quite small, and presuming ill intent on the part of any specific opponent is a bad idea.

On the other hand, to look at the situation, and see how many accusations are flying about, suffices to prove that there are bad guys at work, though it doesn’t suffice to prove which side they prefer and to what degree of unanimity. When accusations of gross malfeasance exist, either the accuser or the accused or perhaps both pretty much have to be in the wrong, i.e., unethical. Judgment must be applied to find out which is which, but the presence of a malign influence is already pretty much guaranteed.

I think, though, that Lucia has missed the point quite thoroughly.

The point isn’t that there are some actual bad guys among the various fools and egotists who plague us, though I have no doubt that there are some. The point is that scientific opposition and legal/political opposition are based on very different views of ethical behavior. When a scientific mind encounters a scientific mind on the opposite side of a question, if all is going well the exchange of ideas can be beneficial for both parties, because whatever opposing goals the parties may have are (at least ideally) subordinate to their shared goal of discovering the truth. This ideal may usually be honored in the breach, of course, but both scientists operate in a larger context where discovery of the truth (at least ideally) is the institutional goal of all participants.

That these ideals are under stress is not something I would contest, but let’s agree at least that this is the ideal. Wiener refers to nature as the opponent of the honest scientist as a “devil” in the Augustinean sense; an evil of incompleteness, not of competitive agency.

This sort of opposition is a Manichean “devil” in Wiener’s taxonomy. It does not even have to be malign, really. It just has to be implacably in opposition regardless of evidence.

The trouble arises when the Manichean worldview addresses matters that are ordinarily discussed on Augustinean turf. Many of the Manichean techniques are of absolutely no use to the Augustinean scientist, who is thus ill-versed in them. In short, implacable opposition breaks science.

Debating techniques are brought into territory where they are inappropriate, and confusion reigns. This confusion is quite perfectly captured in an analogy by the contest between the Augustinean scientist #1 and the Manichean pseudoscientist #2, in the presence of a journalist and something that we shall, for purposes of argument, take to be a duck.

Responding to the superficial aspects of the argument (“heh-heh-heh – he said ‘devil’ heh-heh”) is Manichean itself, and I seem to get shallowly misinterpreted every time I try to refer to ethics around these parts. So listen carefully, low-sensitivity types (and by that I may or may not refer to the insensitivity of your belief structures) I do not say you specifically are evil. I say the configuration of the debate is the consequence of the injection of an inappropriate ethical context. If we approach matters collaboratively we may yet get somewhere, but if we approach matters with merely a veneer of politesse and actually act like opposing litigants in a courtroom, we’re abandoning the principles that make science work.

Update: Please remember, as Deech56 points out in the comments, that in the courtroom of science-related fact, Nature is the judge, and I don’t mean the journal. 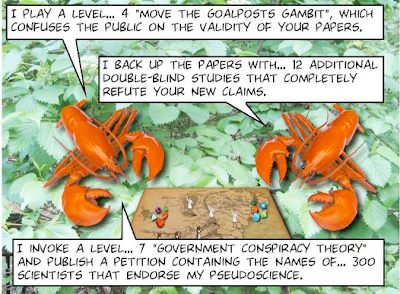