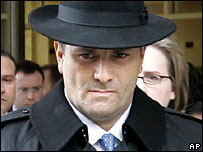 Tom Fuller, over at Eli’s, castigates me for speaking of “bad guys” in the climate change debate. Tom is right on the edge of the category himself, but let me give you a pure unalloyed creep as a reference point, one Greg Pollowitz:

This past week, I was having lunch at a restaurant in midtown Manhattan when my colleague noticed Al and Tipper Gore dining across the room with another couple. It was a frigid day, with record-breaking temperatures keeping most people indoors, and we were the last two tables in the restaurant.
As the Gore party started walking out of the room, my colleague called out, “Hey, Al, how’s all that global warming working out for you?” Gore turned around and stared at us with a completely dumbfounded look on his face. He was speechless. With a smile, my colleague repeated the question, again to a hapless look of dismay.

Finally, Gore mumbled under his breath, “Wow, you sound awfully angry.” I responded with a thank you, explaining to him that we were actually extremely amused. The encounter concluded with Gore’s friend mouthing a very animated “f— you” at us, and they skulked away. My only regret is that no one at the table asked Gore, “What’s the matter? The polar bear’s got your tongue?”

What struck me the most about this meeting was Gore’s complete inability to utter a sentence addressing his life’s work. The former Vice President, Nobel Prize laureate, and Academy Award-winning producer standing before us was a moron, unable to articulate a simple comeback to address all that he has stood for since leaving office. He could have simply ignored us and kept walking, as he does with reporters, but by stopping and standing there dumbstruck, he looked like a fool.

Exactly how does Mr. Pollitowitz expect a Nobel Laureate and former Vice-President to react to a belligerent and stupid question interrupting what must otherwise have been a pleasant interlude?

“How’s being a horse’s ass working out for you?” would be the best answer, but it would hardly reflect well on the responder’s dignity. What is the right Nobel Laureate expression for “f— you” anyway?
To ice the cake there is that

My only regret is that no one at the table asked Gore, “What’s the matter? The polar bear’s got your tongue?”

And these people are so proud of their witty repartee as to brag about it. Got any cancer jokes while you’re at it?
OK, Tom? Those are the bad guys. Get it?

The image of a guy in a black hat looking mean, who turns out to be Jack Abramoff, is all over the web. This particular instance is lifted from the beeb.