OK, so I don’t want to discourage people from sending me free books. That means if somebody sends me a review copy of something relevant, I read it and review it. So unfortunately I lost my free copy of Greg Craven’s book “What’s the Worst that Could Happen“.

I finally gave up on finding the free copy. Fortunately, it’s an inexpensive purchase at $14.95. And I have to say that I didn’t mind paying all that much.

Now I’m not in the target demographic for the book (which will lead into my biggest disagreement with it) so maybe I’m not one to judge. On the other hand, it’s easy to see Craven’s influence in ClimateSight’s writings, and she is off to a terrific start as a climate blogger.

Craven’s approach is very much in line with something I’ve been saying all along. I refer to the idea of a “network of trust”. No scientist really knows everything he or she claims to know from direct experience. Most of what we know as individuals comes from two factors: 1) a network of trust and 2) the test of coherence.

Don’t get me wrong. What we know collectively comes from observation, experiment, theory and calculation. But what we know as individuals we mostly know because we learned it from someone else. People who don’t learn from others don’t learn very much.

Now, the nonscientist, the earnest and bright high school student, the wise and yet wisecracking high school physics teacher, your Aunt Maggie, don’t have the second way of evaluating science. 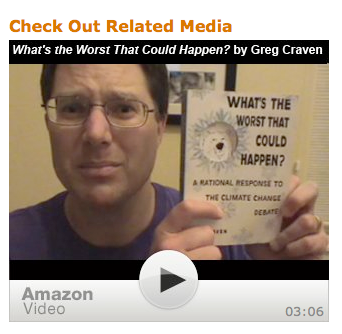 The wise and yet wisecracking high school science teacher in question
Click the image for an amusing video demonstrating his style and hawking the book.

That’s why Craven’s book is about the first way of learning, what I call the network of trust.

Basically “what do you believe” comes down to a question of “who do you trust”. Haivng made that point, he weighs the believability of the warmers and that of the no-warmers. Sure enough, when you actually start counting, the number of naysayers turns out to be, well, puny. As I once explained with this graph. While Craven touches on some of the issues in climate science, mostly he is about explaining the scientific culture.

Craven is right to do this. Despite the naysayers’ constant harping on “focusing on the science”, study of the details is really for the people who have developed sufficient grasp of scientific coherence. Which, I’m sorry to say, isn’t guaranteed even for tenured faculty. Never mind high school kids. So how should a kid (or an adult!) who is honest enough not to just go with his or her crowd, who wants to get to the right side of what is obviously an enormously important substantive question, evaluate the competing arguments?

By trust, and trust alone. That’s the only way to do it.

A big reason we are having so much trouble these days is because the networks of trust, especially the connections between science and society, but also the connections between any sort of authority and society, are in bad condition. I think if the national science academies of the main science producing countries on every continent unanimously agree on something, if the international body of scientists appointed by every country makes stronger statements every six years every time they issue a report, and if every major relevant scientific body agrees, that ought to be enough. Yet the public remains unconvinced.

Craven decides to look at both teams in detail. He cuts the denialists every inch of slack he can come up with, and they still come up wanting in the trustworthiness department.

That is a great service. (To be sure, he encourages the reader to make their own evaluation.)

All of which brings me to my biggest disagreement with Greg Craven. This is a book out of left field, and so it has statements here and there that strike the climate geek as bizarre, but they are minor points, and I don’t feel a need to quibble.

We do have a point of disagreement. Greg says you should check your own conscience for “what would make you change your mind”? He says that if you can;t come up with anything, if that slot is empty, then your mind is closed and that’s a red flag for incorrect thinking. But I have argued something that sounds pretty much like exactly the opposite!

But I have a complex and elaborate coherence structure to draw upon.

Consider how I got mixed up with the Klotzbach paper. Prominent naysayer Joe d’Aleo’s blog alleged that most warming on land was due to a bias in the land surface temperature record, referring to Klotzbach’s paper. Klotzbach’s claim was not consistent with my coherence network. Therefore, I resolved to figure out what the unclear claim really amounted to. The deeper I got into it, the stranger it got. Eventually, one of the authors was compelled to admit that the word “bias” did not actually indicate an error in temperature. Further reading revealed many other flaws in the work, although the key one, which appears to have been reported (somewhat at second hand) by James Annan, is something I still don’t entirely understand.

This is where the first principle cuts in. Should I further investigate the key claim, still contested by the authors? Well, I know James to be an extraordinarily careful and precise thinker, and it’s already demonstrated that his opposition is not. Since boundary layer meteorology is not my forte, and since the rest of the paper is flawed in many ways, I feel satisfied that it’s best to put my attentions elsewhere.

The main point for present purposes is that I immediately questioned the result claimed by d’Aleo on the basis of its incoherence with everything else I know. And my questioning turned out to be justified. The publication, though it passed peer review, probably should not have done so. It looks like science from a distance, but up close it looks like nonsense.

It’s interesting that the article which violates Craven’s principle is one which won me something of a convert. My old college buddy King of the Road, who arrived on this site a skeptic, was not won over by the strength of detailed argument, but by the appeal to coherence. Having a rich enough body of knowledge of his own, he understands how certain claims can be dismissed as nonsense, while others remain within the spehre of possible sense. So while Craven’s advice regarding openmindedness is good for people who don’t have a richly developed sense of intellectual coherence, it’s not good for those of us who, um, have a sufficient body of actual knowledge.

But this is, in fact, consistent with Craven’s other point. Which is to trust the geeks. (Some of whom actually are hippies, but that’s another story for another time.) Why trust us? Not because we play chess better than you do while you dance better than us. Nor, even, because we really ultimately know what’s what.

In summary, Craven’s book is not enormously interesting to a scientist or science enthusiast. I would not recommend it directly to most of my readers, but we are not its target audience. It does not draw upon mathematical or physical coherence.

It just says, c’mon, it’s obvious, this gang is the guys who know what they’re talking about. They’re not guaranteed to be right, but you’re asking me to make a pretty huge bet that they are for sure certainly wrong. Why would I do that?

And that, in a nutshell, is the whole story told the right way. This is the book to give an earnest skeptical high school student, or a busy and disengaged adult. Craven has done us an enormous service in finding a way to address these audiences.