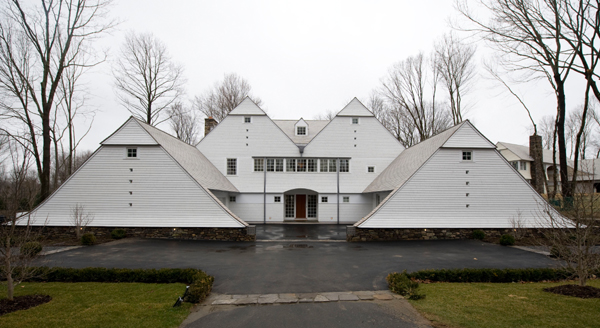 I’m not entirely sure what to make of this LEED certified green building, a single-family home.

Set on 74 partly wooded acres with a private lake, Windermere promises to be very lavish and, believe it or not, very green — as in energy-saving and preservation minded.

Windermere is the first project of NRDC Residential, a new division of the National Realty and Development Corporation of Purchase, N.Y., which wants to develop a niche as a builder of “architecturally driven, planned communities with an environmental consciousness,” said Mark Robbins, the division president.

The Times also confidently asserts this:

It is the first of 24 homes planned for a development named after an area in the English Lake District, and built in a style meant to evoke 19th-century English country houses.

Have a look at the picture and see if you find it evocative, and if so, tell me, exactly, evocative of what.

Update: Somebody just hit this article, first posted April of 08, so I looked again. On the whole I think this item missed the attention it deserved, so I am reposting it.