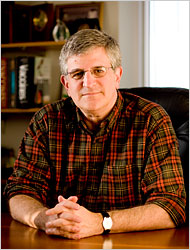 The New York Times reports on a genial, diligent MD who is afraid to go on a book tour:

“I’ll speak at a conference, say, to nurses,” he said. “But I wouldn’t go into a bookstore and sign books. It can get nasty. There are parents who really believe that vaccines hurt their children, and to them, I’m incredibly evil. They hate me.”

Dr. Offit, a pediatrician, is a mild, funny and somewhat rumpled 57-year-old. The chief of infectious diseases at the Children’s Hospital of Philadelphia, he is also the co-inventor of a vaccine against rotavirus, a diarrheal disease that kills 600,000 children a year in poor countries.

“When Jonas Salk invented polio vaccine, he was a hero — and I’m a terrorist?” he jokes, referring to a placard denouncing him at a recent demonstration by antivaccine activists outside the Centers for Disease Control and Prevention in Atlanta.

Of course, he is accused of being in it for the gold.

Should we care? Of course we should. Is this our fight? Of course it is.

“Opponents of vaccines have taken the autism story hostage,” Dr. Offit said. “They don’t speak for all parents of autistic kids, they use fringe scientists and celebrities, they’ve set up cottage industries of false hope, and they’re hurting kids. Parents pay out of their pockets for dangerous treatments, they take out second mortgages to buy hyperbaric oxygen chambers. It’s just unconscionable.”

[Dr. Nancy J. Minshew] blamed journalists for “creating a conspiracy where there was none.” By acting as if there were two legitimate sides to the autism debate, she said, “the media has fed on this — it’s great for ratings.”

Arthur Allen, the author of “Vaccine: The Controversial Story of Medicine’s Greatest Lifesaver” (W. W. Norton, 2007), has publicly debated other journalists who argue that vaccines cause autism. Six years ago, he wrote a seminal article in The New York Times Magazine titled “The Not-So-Crackpot Autism Theory.” He later changed his mind and now “feels bad” about the article, he said, “because it helped get these people into the field who did a lot of damage.”

Dr. Offit’s book “needed to be written,” he said. But he is skeptical that it will end the struggle.

“There are still people who believe fluoride is dangerous, who think jet contrails cause cancer,” he said. “I’m waiting for the debate to get beyond that, but you’re not going to convert some people.”

It’s not left vs right; it’s fantasy vs. evidence. Science actually resolves questions, but society seems to be losing its capacity to benefit from that. (I think it was actually better at it in the post WWII decades. This seems to be affecting all the English speaking countries; I can’t speak for the rest of the world.)

Engineering can provide great products, and people can tell. So we get really good razors and shave creams, for instance. Amazing stuff. But when science offers advice, the body politic can’t tell the real thing from the malicious nonsense. Confused people follow charlatans as if they were wise and treat real experts as if they were charlatans. The consequence for the charlatans may be comfortable, but for the rest of us the whole situation can be tragic.

By the way, Idiocracy is a very stupid movie. But is a very smart movie, too.