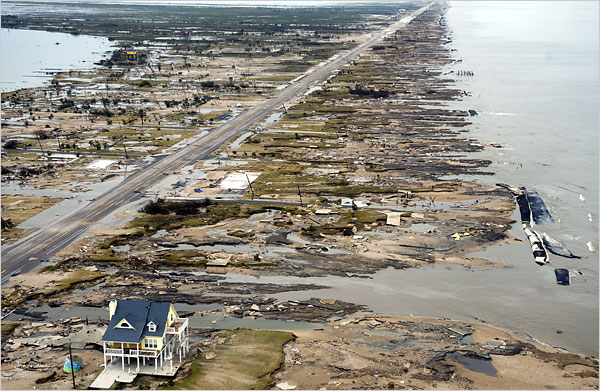 Interesting that Galveston is in Ron Paul’s congressional district.

(The picture is from the New York Times, of the Bolivar Peninsula, near Galveston Island but lacking a seawall. See also this before/after picture on Jeff Masters’ Wunderblog, and these on a Google Earth blog.)

I find it hard to dislike Mr. Paul entirely, though he quietly panders to the silly idea, which has some currency in Texas, that NAFTA is a conspiracy by Mexico and Canada to dominate the USA (!). Of course he is a global warming inactivist as well, though he, like Gov. Palin, seems to calibrate his skepticism for his audience.

I wonder whether his libertarianism extends to FEMA and disaster relief for people who build in disaster-prone areas. It’s odd that he has a comment from this week about the economy (back to the gold standard!) and nothing about the disaster on his website now.

Like I said, though, it’s hard to dislike the man entirely.